One Week in Da Nang

This week, at the far western end of our street, where the newest bridge in Da Nang crosses the Han River, a mismatch between a motorcyclist and a truck resulted in the cyclist sailing over the rail and into the river. His body has yet to be found. Later that same day, my son Tim and a fellow surfer from France helped drag a drowned Vietnamese schoolboy from the surf at the opposite end of our street (a second missing boy has yet to be found). That evening Tim said, “He was just green, man, and water kept foaming out of his mouth. I wonder if we could have saved him if we saw him earlier.”

In my Vietnamese class this week, we’ve been learning words for colors and animals and body parts: “I have a crab. It is purple. It has small eyes. It is delicious.” 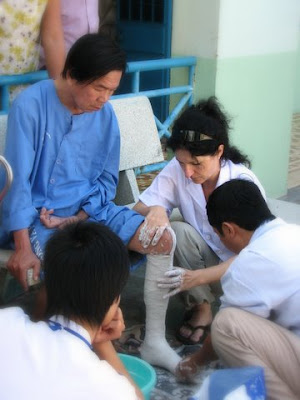 Today brace-makers came to the rehabilitation center where I volunteer to fit six people for new leg braces that will, hopefully, enable them to walk with the “Steady Footsteps” that are the goal of my little non-profit organization. Six hemiplegic people, five paralyzed on the left side and one on the right, ranging in age from 27 to 80, watched apprehensively as the two orthotists casted each affected leg in turn. Next week we’ll see if the plastic leg braces (or AFOs as they are commonly called) will combine effectively with the new functional exercises I’ve been teaching the Vietnamese therapists to get these folks walking safely and well.

I bit the bullet and wrote a check to the IRS to cover the balance on my 2006 taxes, even though I have grave misgivings about the purposes to which the US government puts our tax dollars. The phrase, “Render unto Caesar the things that are Caesar’s” had risen, unbidden, to mind as I pondered what to do. Ironically, the amount that I sent to the IRS was offset this week by the rise in value of the non-US currencies in which we had invested the proceeds of the sale of our American home. There’s some poetic justice there, I suppose.

We found a local source for dried oregano and basil and parmesan cheese so that our best friend Tam, who has a little restaurant that caters to foreigners, can make spaghetti sauce that smells “just right.” “Wow, “said Tam, examining the plastic bag of dried oregano leaves, “that looks just like marijuana!” It did. I’m so glad that I don’t have to try to finesse a bag of oregano through customs for her on my next return trip from the US!

We got an official notice from the People’s Committee of Da Nang that the request of the Da Nang City Health Department that I be allowed to continue to volunteer at the Da Nang Rehabilitation-Sanatorium Hospital had been approved. Now, it seems that matters have been forwarded to the Da Nang Department of Foreign Affairs, regarding approval of my organization, Steady Footsteps. We’ve gone about our whole move to Vietnam completely backwards and yet, for us, in these uncharted waters, that’s the only way it seems to work. I’ve encountered organizations that have spent years waiting for official approval, collecting funds and building infrastructure before they did anything to actually help Vietnamese people. We did not. We just incorporated our little NGO, sold our house and moved to Vietnam with tourist visas and got to work. I have been called, as I blundered from one Da Nang government office to another, “The Woman Who Did Not Plan Ahead.” But there was no way for us to accomplish what we did sitting safely back in America. And there was no way we could afford to travel back and forth, building this endeavor up incrementally over several years. We felt led to make this giant leap—quitting our jobs, selling our house and packing ourselves and a few personal items up and heading for Vietnam. And it has worked out well. We are living comfortably in a pleasant corner of Da Nang, two blocks from the South China Sea. 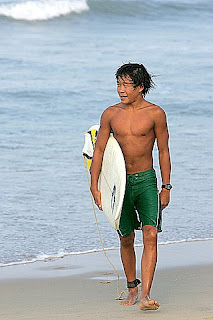 Our son surfs daily and is enrolled in an accredited American high school via the internet. We use the internet also to maintain connections with friends and the news of the world. We have found wonderful friends here in Da Nang who guide us through the mysteries of life in Vietnam. Our cars are gone, we have no heating bills, and our expenses are low. We are doing good work here--at a slow enough pace that we can see what works and what doesn’t and adjust our methods accordingly. I’ve got time to read and to write. Who could ask for anything more?
Posted by Steady Footsteps