One of the unexpected joys of living and working in Vietnam has been in having the opportunity to meet and encourage two young artists: Nguyen Tan Hien and Ho Viet Phuong. Hien and Phuong were both university students-- Hien, studying mathematics in his home town of Buon Ma Thuot, and Phuong, studying architecture in Ho Chi Minh City--until they became quadriparetic (weak in all four limbs) due to spinal cord damage--Hien, having been struck by a bus while riding his bicycle, and Phuong, due to a spinal cord tumor. When our paths crossed on the spinal cord unit of the Da Nang Rehabilitation-Sanatorium Hospital, I noticed that they were spending much of their free time, between their daily physical therapy sessions, drawing. While my husband Dave (who is an artist himself) and I saw real talent in these early drawings, the young men dismissed our compliments, saying that they knew they could only become “real” artists if they were able to get admitted into a university art program and learn to create art “correctly.” 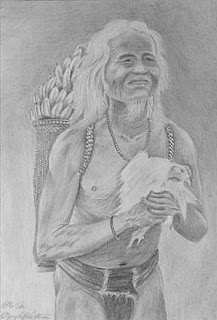 Dave and I decided we needed to convince these guys that they had real talent—even though they lacked art school diplomas. So we commissioned Hien to create some pencil sketches for Steady Footsteps greeting cards and we purchased two of Phuong’s wonderful paper mosaics. As Hien began painting in watercolors and--later--acrylics, we bought some of his paintings as well. And every time we had a foreign visitor at the hospital, we took them by Hien and Phuong’s room, which was gradually evolving into a cross between a hospital ward and an art studio. All of the visitors exclaimed over the art work and some took the opportunity to purchase pieces to hang in their homes in Germany, America and Australia. At our suggestion, the proprietors of three local shops: Reaching Out Handicraft Shop of Hoi An; Tam’s Pub and Surf Shop near China Beach; and the Bach Mai Art Gallery at 12 Trung Nu Vuong Street (just across the street from Da Nang's famous Cham Museum) all agreed to carry and sell Hien and Phuong’s work without charging any mark-up. 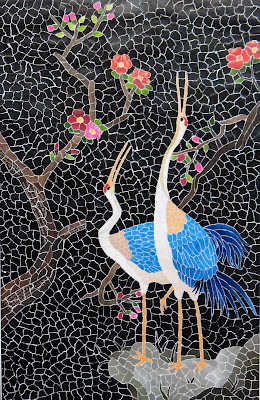 A few weeks ago, I saw Hien and Phuong wheeling themselves up the street toward the city bus stop. They said they were “on a business trip”—off to meet with a shopkeeper in the neighboring town of Hoi An. This week, Hien told me, he is working with yet another patient, trying set up his own website.


Our friends Hien and Phuong now consider themselves professional artists—quite a concept in a country like Vietnam, which is just gradually emerging from a bare subsistence level economy and where 95% of the disabled are unemployed! Dave and I are delighted to have been catalysts in their development—and we’re delighted, as well, to have Hien and Phuong’s drawings, paintings and paper mosaics brightening the walls of our home! 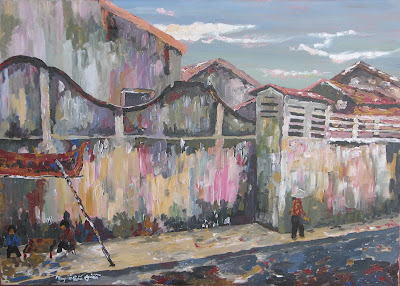