An Early Christmas in Da Nang

Last Saturday, I woke early to the sound of motorbikes zipping past our Da Nang townhouse. What would I see when I looked out the window? The previous day, scarcely any riders had worn helmets in town, but this day--15 December 2007--was slated to be the first day of Vietnam’s mandatory universal helmet law. Both the Vietnamese government and international groups such as the World Health Organization have long been aware of the on-going tragedy of Vietnam's insanely high rate of traffic fatalities—among the highest in the world. The Vietnamese government and various NGOs (non-governmental organizations) have made repeated attempts to resolve this problem over the years. Back in 2000, Bill Clinton, during his final trip abroad as president, helped kick off the “Helmets for Kids” project, presenting Vietnamese school children with specially-designed motorbike helmets, produced by the Asia Injury Prevention Foundation-supported ProTec helmet factory of Hanoi. Over the years, various helmet laws, limited in both scope and enforcement, have come and gone. Public awareness projects have flared up briefly and then subsided. Seven years after Bill Clinton’s historic visit, motorbike helmets on city streets are still rare enough to attract notice and derision. And even though most Vietnamese are aware of the prevalence of deadly motorbike accidents, that awareness is not sufficient to convince them that they, personally, should be wearing a helmet as they travel the streets of the city. The excuses they offer are astonishingly varied—but it all boils down to the fact that they would never wear a helmet unless they were forced to do so.

So, finally, that’s what the Vietnamese government decided to do. For several months, short and poignant public awareness spots on TV have dramatized the often tragic aftermath of traffic accidents. Since the imposition two months ago of a new and stricter helmet law affecting the main roads outside of town, television news shows have highlighted the vigorous and effective work of the police in enforcing that law. Also featured on local and national news have been the helmeted workers of the Da Nang Health Department and interviews with yours truly at the Da Nang Rehabilitation Hospital along with video images of brain-injured patients at our hospital.

Local shops have offered heaps of brightly colored helmets for sale in recent weeks, yet they seemed to be worn primarily by travelers entering and exiting the city—rarely, if ever, by locals. It’s really hard to believe that everything could change overnight. 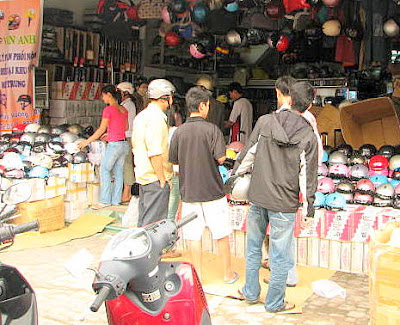 I padded over to my window on Saturday morning, with all the anticipation I’d felt as a child on Christmas morning. (Would there be snow on the ground? Presents under the tree?) Gazing out my third floor window, through tears of joy, I saw that every single rider passing by was wearing a brand new, brightly colored protective helmet.

For me, it was Christmas. 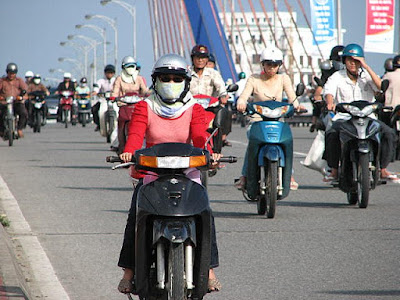